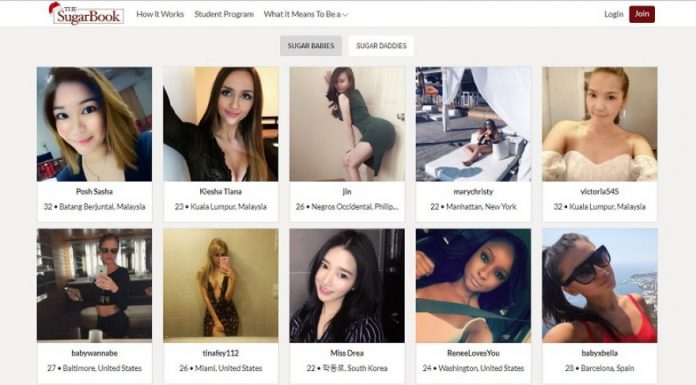 A Malaysian money-for-love dating platform TheSugarBook, has a very large following in Singapore, attracting more than 20,000 sign-ups from the tiny republic within a year of its launch.

It is looking to recruit even more “sugar babies” through promotions targeting undergraduates, said TodayOnline.

The site is facing criticism from both Singaporean parliamentarians and outraged women groups, but users are saying it is their right, their life and they can do what they want.

In plain terms, TheSugarBook markets itself as a link between wealthy individuals who wish to pamper sugar babies with financial support in return for love and companionship.

While this is not new on the internet, it is indeed a bit uncommon coming from Malaysia, a largely conservative Muslim country where a form of extremism has started to force the government to curb on perceived sexual and other excesses.

The strange part in this whole story is that no one in Malaysia is making a fuss about it. The site does have some 28,500 users said to be from Malaysia itself.

Malaysians are also known to be lurking in the dark corners of sites like Tinder, OKCupid or Craiglist, seeking companionship or simple sexual encounters.

These sites are not banned in the country.

On its website, TheSugarBook said it aims to “provide a safe and discreet online platform which focuses on anonymity and privacy to legitimately build relationships with benefits between consenting adults”.

Singapore users make up the second biggest group of TheSugarBook’s 75,000 members, behind Malaysia, where there are at least 28,500 users.

The typical profile of those who signed up as sugar daddies are 30- to 45-year-old C-suite executives or professionals, such as lawyers, bankers and entrepreneurs, drawing US$360,000 (RM1.44 million) annually.

Premium members can see who viewed their profiles or “favourited” them, allowing them to “selectively engage” with these users.

Premium members can also send as many messages as they want to other users, and get invited to private events organised by TheSugarBook.

The rate for sugar babies is US$9.95 monthly, although there is a promotion offering free premium membership to students aged 18 and over, if they register with their university email addresses, under a promotion with the tagline, “discover the modern way to avoid student loan debt”.

Women groups in Singapore said they were “appalled by the idea” of the app.

A company spokesman said: “Just like Tinder, OKCupid, or Match.com, we are unable to restrict memberships to only singles,”.

When asked how it is different from extra-marital dating website Ashley Madison 2.0, which was banned by the then-Media Development Authority of Singapore in 2013, TheSugarBook said: “We are in full support of successful relationships which could lead to marriage and more.”Follow us on Social Media

Healing the Divide founder apologises for “Asking people to flood the call centre for no genuine reason… Please forgive me if I did not...

Singapore — Ms Iris Koh, the founder of the Healing the Divide group that has been in the news in recent weeks, has been posting video messages over social media after it was reported that she and her husband...
Read more

Man remarries ex-wife to care for her after discovering she has end-stage kidney disease   China — A man who once vowed “in sickness and in...
Read more