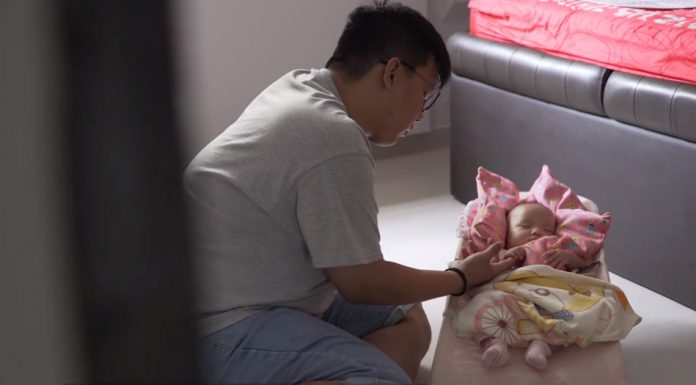 Six months pregnant Goh Chieh Ting was out for breakfast at Jurong West with her mother-in-law on 13 May last year. The pair had been about to cross the road to visit the market when Goh was hit by a lorry.

Goh was rushed to Ng Teng Fong General Hospital. Unfortunately, the expectant mother succumbed to her injuries but doctors were able to save the premature baby, who spent two months in neonatal intensive care, and another three months in intensive care.

Baby Yunice survived and is now a cheerful five-month-old infant.

A special video of the miracle child’s story was broadcast during the opening of The Society for Emergency Medicine in Singapore’s Annual Scientific Meeting 2018 over the weekend:

The video recounts how the medical team at Ng Teng Fong General Hospital, the Singapore Civil Defence Force, and the team at the National University Hospital’s neonatology department worked together in saving Yunice’s life.

On the day of the accident, staff at Ng Teng Fong received a standby message from the SCDF around 8am. The team decided to perform a perimortem caesarean section, as such a surgery would increase the chances of both lives being saved.

Unfortunately Goh did not survive the procedure and was pronounced dead at 9.30am. Yunice survived the procedure and was safely extracted from her mother’s womb. A team performed manual ventilation to resuscitate the baby, while she was immediately transferred to the closest neonatal intensive care unit at NUH.

Yvonne Ng, a senior consultant at NUH, said that Yunice is growing well and is a cheeful child: “She is actually a very cheerful little girl. She will look at you, and she just gives you the biggest smile ever. I am happy to report that she is growing very well, and developmentally normal.”

In what is perhaps the most heart-wrenching moments of the video, the baby’s father, Dave Yuen, speaks about how he has been coping with Yunice since the tragedy. He expressed his joy to have his daughter in his life and expressed gratitude to the medical team that saved his child:

“With Yunice physically around in the house, every movement that she does… with her looking at you, just makes you feel happy. She brings in the positive vibe at home.

“On behalf of my family, I would like to thank the medical team for giving me a miracle, giving me hope.”

A 19-year-old admitted today (6 Oct) to sexually assaulting, molesting and secretly filming four underage girls within four years. His victims included his cousin and an aunt who is seven years younger than him. The accused pleaded guilty to four charges,...
Read more

About 80 residents were evacuated from Block 120 Marsiling Rise on Tuesday (4 Oct) after a fire broke out at a third-floor unit. The Singapore...
Read more