Home News Featured News Malaysia gets its own flag wrong after massive slew of flag mix-ups... 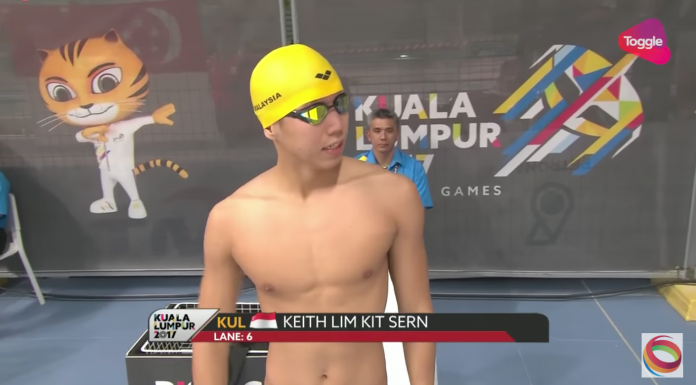 Malaysia got its own flag wrong at the SEA Games telecast after mixing up the flags of several countries competing at the Games held at Kuala Lumpur this year.

During the finals of the 50m freestyle, Malaysia’s Keith Lim Kit Sern was in lane 6. When the announcer introduced the swimmer, the infographic at the bottom of the screen stunningly shows the Singapore flag instead of the Malaysia flag.

Perhaps what’s more ironic than the organisers getting their own flag wrong is that the correct flag is clearly displayed at the side of Keith’s swim cap for all to see:

Maybe the error was simply foreshadowing the eventual winner of the event – Singapore’s Tzen Wei Teong who clinched gold in his SEA Games debut itself.

Jokes aside, Malaysia’s negligence is not the first such incident concerning flags since the Games began. After a Malaysian daily mistook Poland’s flag for Indonesia’s, SEA Games organisers made the same mistake on a grander scale by publishing the wrong flag for Indonesia in a commemorative magazine especially printed for the SEA Games:

These aren’t the only mix-ups involving the Indonesia flag. An earlier SEA Games 2017 booklet mixed up the flags of Indonesia and Thailand.

Yet another telecast screenshot showed a flurry of such gaffes, with organisers getting a whopping 8 out of 11 flags wrong:

Vietnam was given the Singapore flag, Singapore was given the Thailand flag, Thailand had the Indonesian flag, Indonesia competed under the Vietnam flag, the Philippines and Myanmar featured the Myanmar flag, Laos had the Cambodian flag, while Cambodia bore the Laos flag.

“We wish to assure the government of the Republic of Indonesia that all measures have been taken to address this unfortunate situation.”

Malaysian police investigated the matter then to ensure that such errors do not occur again so that Malaysia’s ties with neighbouring nations do not get affected. Bukit Aman federal police special branch director Seri Mohamad Fuzi Harun offered at the time:

“Perhaps it was a technical error. We are investigating and will take action as the incident should not have happened.

Such gaffes have attracted widespread criticism from prominent figures and members of the public alike, with the hashtag #ShameOnYouMalaysia going viral.

“Friendship is the greatest legacy in sports, but a mistake in presenting a national identity of a nation is not justified.”