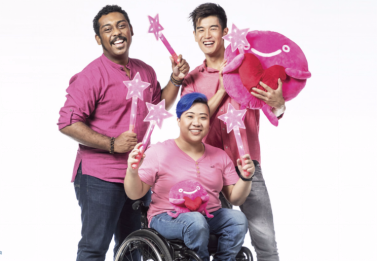 Pink Dot 2017 – Singapore’s annual celebration in support of the LGBT community – drew a massive turnout of 20,000 supporters this Saturday, 1 July, at Hong Lim Park. This year is the ninth anniversary of the local rally which has been noticeably progressive amid Singapore’s tightly-controlled, conservative social and cultural atmosphere.

So what was different about Pink Dot 2017 compared to the event in previous years? Here are 6 differences that set this year’s pink picnic apart from pink picnics in the previous 8 years:

As compared to the past, more families, children and elderly folks could be easily spotted at the rally site. Pink Dot 2017 organisers were proud to share that many elderly volunteers joined to pitch in this year in anticipation of the event. This is notable as Pink Dot is conventionally attended by young people who are generally considered to be more open-minded about supporting the LGBT community.

For the first time, barricades were set up along the park at Speaker’s Corner to comply with new updates on the Public Order Act that bans international supporters from participating in political causes. More than 60 security personnel and auxiliary police officers were appointed to oversee that the ban was enforced.

According to Pink Dot spokesperson Paerin Choa, the level of security was three times more intense than security at Pink Dot in the past.

This year, participants had to present their identity cards at seven designated entrance points to validate their citizen or permanent resident identity to gain entrance. Bag and body checks were also conducted concurrently.

Despite the new restrictions, 20,000 citizens and permanent residents were admitted into the site, excluding the huge crowd parked outside the park. Maximum capacity was reached before 7pm, just two hours after the official commencement of the event. Many participants wrapped up their picnic mats to accommodate others.

From 6pm, long stretches of waiting lines were observed at the gates as the checks slowed down the process of entering the event. However, the crowd did not seem to be deterred by the hassle. Unlucky enthusiasts who were too late to enter the site that was packed full remained standing outside the park throughout the evening.

Government authorities introduced new regulations this year that mandate that the event is to be sponsored by Singapore-registered and incorporated companies only. In spite of the setback, Pink Dot 2017 managed to garner support from 120 local sponsors, raising more than $240,000 – far surpassing the organisers’ original target of raising $150,000 from 100 companies. This was the highest sponsorship amount the event has received to date.

Spokesperson Paerin Choa said, “We hope it sends a signal to everyone these are not foreign concepts. these are embraced and valued by Singaporeans here.”

Cathay Cineleisure’s decision to carry Pink Dot 2017 advertisements in their building caused a controversy when it inadvertently spurred disturbed netizens to attack Pink Dot and lodge several police complaints against the event.

Upon investigation, the Advertising Standards Authority of Singapore (ASAS) advised Cathay to amend the advertisement by removing the campaign’s official slogan of “supporting the freedom to love” as the Singapore Code of Advertising Practice mandates that advertisements should not “downplay the importance of the family as a unit and foundation of society.”

The council also claimed that the slogan did not keep with “Singapore’s shared values” which include “family as the basic unit of society”, “community support and respect for the individual”; and “consensus, not conflict.”

In a bold move, Cathay – a corporate sponsor of the rally this year – stood its ground and refused to remove the advertisement, reiterating that the organisation “always believed in an all-inclusive society where there is a place for everyone to call home”.

Interestingly, instead of being a setback, this controversy brought more attention and popularity to the event and became a blessing in disguise.

This incident was one of the major upheavals for the Pink Dot. Intentionally or not, it added popularity and support to the Pink Dot as a blessing in disguise – the ad survived eventually.

Lee Kuan Yew’s grandson and Lee Hsien Yang’s second son, Li Huanwu, brought a minor reprieve in the Lee Family Dispute that has been monopolising headlines with a Facebook post urging the LGBT community and their straight allies to participate in the rally.

Additionally, local media stars did not shy away from expressing their support for Pink Dot, with paralympian Theresa Goh, actor/singer Ebi Shankara and singer Nathan Hartono all accepting to be the face of Pink Dot as its ambassadors for the year.

A spokesperson highlighted Pink Dot’s aim to support the freedom to love by saying, “It’s important that LGBT Singaporeans can come out safe to be themselves, and to let the like-minded and open-minded Singaporeans to show their support. We hope that barriers can be broken down, and Singapore will one day be truly inclusive and diverse.

Some outside the rally site were skeptical. One visitor looking in from beyond the barriers enclosing the park commented, “LGBT is to be accepted but not to be promoted. I’m afraid kids will be easily influenced in such a small island. Homosexuals shouldn’t be advocated, even if we’re an inclusive society.”